“Probably one of the biggest moments of my career.”
Christiaan’s story from the 10th of May 2021. 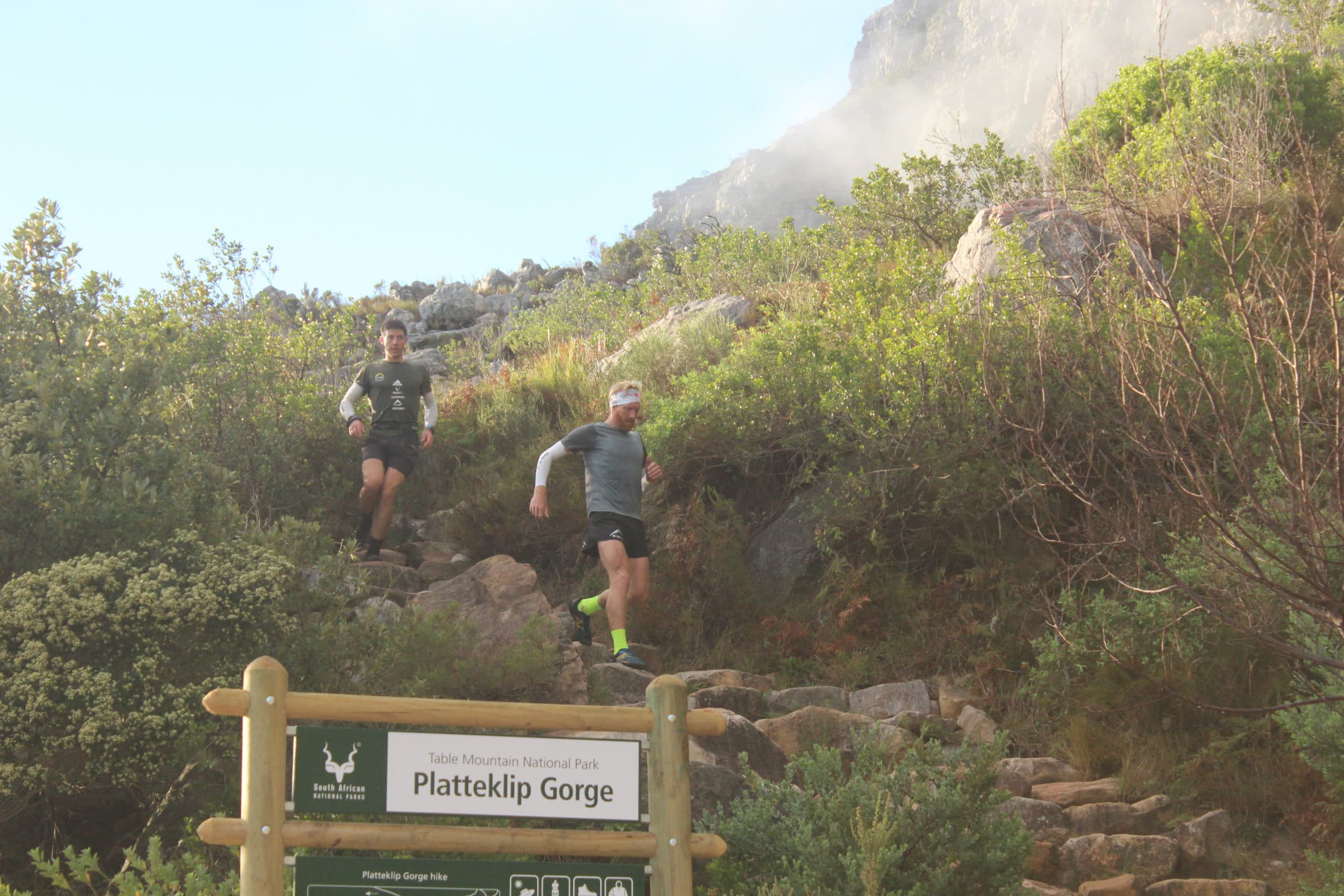 Why did we do it?

AJ then applied for a Guinness World Record attempt, which lasts for three months. And as we all know, life happens, one procrastinates and leaves things to be done last minute.
After another conversation, we were left with a choice. Either wait and reapply, or be crazy and commit. Once you start moving things around, they get postponed. Sometimes you just have to do it.
So right there and then, we jumped in. We had to complete the attempt before the 11th of May…

What physical planning goes into an event like this?

We both are ultra runners and have raced competitively on the international scene, but to put things into perspective, this was AJ’s longest run ever in time, and by far the most vertical distance we moved in a single effort.

So, you would think we will attempt this well rested? But only 2 weeks prior to this I did the 100km Ultra trail Drakensberg and finished 2nd in a very competitive field and was still broken on my test run a few days before the attempt. AJ on the other hand took part in the annual PCC (Platteklip Charity Challenge) and only 3 weeks prior to our record attempt he did 11 laps up and down on a section of the climb. He was also not in his best physical state when we stepped over the startline at 4:02am on Monday 10 May.

We would have liked to prepare more for an event like this, the fact that we went into it quite blindly was mainly a good thing. I had no idea how hard it might be, something better not to know.
AJ had a better sense of what was ahead, as he had done some of this craziness before.

There was just a point during the day when our bodies felt like they were broken to pieces… and only our heads were left.
It’s then when you need a very strong reason why you are attempting the challenge.
We tapped into all the energy of the support we received. There were people backing us everywhere, on top of the mountain and below, in obscure hours. And therefore we didn’t want to give up.
We still, however, went through some dark patches… cramping, nausea, dehydration. And a lot of pain.

The one thing you can not go without in such an exhausting effort is the best nutrition, and enough of it. I burned around 8500 calories, according to my Garmin watch. You cannot skimp on this… it’s your fuel. As a professional athlete, you also don’t have that much fat to burn, you need sufficient fats, carbs and protein for the demands of the day. And the demand was high! Climbing always gets your heart rate up. It’s an effort, and will always be, no matter how slow you go.

Initially, I ran with some Biogen plant based protein bars, and Buttanutt sachets (which actually fit well into my Naked Innovation Belt). It’s great proteins that break down easily, and I knew it would help my body when the laps would start their bite. We ate well in the beginning, knowing there would be a point we wouldn’t feel like eating anymore. Which is when you need to go over to liquid foods.

Landie brought me a smoothie at lap 5, and whatever was in there was amazing. I think I had about four smoothies throughout the day, about 5 energy bars, an avo, Wazoogles oats, 3 Buttanut rolls, chicken broth and salt chips, half a pizza, soup, a footlong nougat, yellies, fruit, Biogen gels, 5 Tribe coffees and the list goes on 🙂

It really helped to run to your aid station every hour and a half, hour and fifteen minutes.
The day is a lot easier like that, as opposed to running a hundred kilometers and carrying all of your goodies with you.
But it’s also difficult when you run past your finishing point 13 times. Getting out of the ‘nice zone,’ is hard when it’s where your friends, good food and music are.

I calculated a total of around 18 liters of fluid that I took during the day. When arriving at the bottom of a lap, I just grabbed a soft flask that was filled with Biogen electrolytes, Cytogen or Carbogen and ran with it. I really discovered the value of Carbogen there. It’s a great source of low GI energy, without caffeine.

I sweat most of my fluids out, 12.5L according to my Garmin fenix 6 Sapphire and was probably dehydrated at a point, you always are. But this time, we hands down had better hydration than in a usual race. Reason being we never missed a single time to drink when we crossed the stream of water on our way up. We forced each other to drink a cup on every lap. When AJ was in front, he would fill up the water and leave the cup for me on the rock, what a teamplayer!

So when things are really tough and you are facing extreme conditions, you have to be able to depend on your gear. Both AJ and I had our K-Way arm warmers on for the entire day. Definitely for the 4am cold, but also as we entered the heat of the day, we soaked them in the stream and they cooled us down.

We had a couple of clothing changes, because we got so drenched in sweat. It’s fantastic to change into a fresh shirt or shorts, not to mention new socks.

As for my running shoes, I was wearing my Adidas Flow pair. They had enough cushioning, I was quite impressed, in spite of their tough exterior and grip. I switched to the Pearly pair later on, which is a much softer shoe, yet brilliant for the job as well. I have no blisters from the day, no pains.

Without my 30 South sunnies, the heat would have beaten me, especially around laps 6 – 8.

I am very happy with my gear choices for the day.

At the end of the day it looked like there were two guys who ran up a mountain, and they got to be the heroes.

But actually that would not have been possible at all without the people who supported us. I remember having goosebumps at the last two laps… to see our friends waiting there for us, on top and at the bottom, risking being late for curfew just to support us.

It was an emotional finish. There they were, the crazy people who believed in two crazy guys… cheering for us. Being happy for us. What a moment!

I hope the record goes way beyond what we did out there. We aim to inspire people to do something extraordinary, something out of their comfort zone. To get out! It’s not about breaking a world record, or running up and down a mountain 14 times.

We committed our run to the charity called EduNova. It takes a big wave, like breaking a world record, to raise enough awareness for a big problem like education in our country. We loved having this opportunity for exposure for them, and hope to see their plans for a brighter future realize on the near horizon.

And then a real big shout out must go to Grobler Basson, who ran with us for three laps with the best music. He has to be the local trail DJ. He and his wife are super seconds, with a hundred miler from three weeks ago still fresh in their minds. They knew exactly what we needed.

Also a big thanks to Pierre Pienaar, from K-Way, who spent the WHOLE day at the aid station keeping things together.

So many people were spending a lot of time at Platteklip for us. All of them, Blake, Greg, Emily, Janco, Dirkie, Shaun, Tinus, Jamie Marais .. you guys were great support and gave us the best smiles out there.

Also, huge thanks to all the social media, the PR, the photographers, the story reporters on social media. Thanks for backing us all the way.

Table mountain has one of the most technical descents I know. We had to run down in 30 minutes, because we had only a few minutes to spare for the record.
It is downright risky to run a mountain like this 14 times. We could easily have tripped, broken a bone or sprained an ankle.
Therefore, praise be to God… He made our feet like that of a rhebok. We were sent angels like Majozi, a SAN Parks officer who gave us favor and good support on the mountain. And one of AJ’s elders who prayed for us on the run. Actually, all our people were praying for us.
God blessed us and enabled us.

And special thanks to President Cyril Ramaphosa for allowing us only 20 hours of that climb. Another four would have been pure agony. 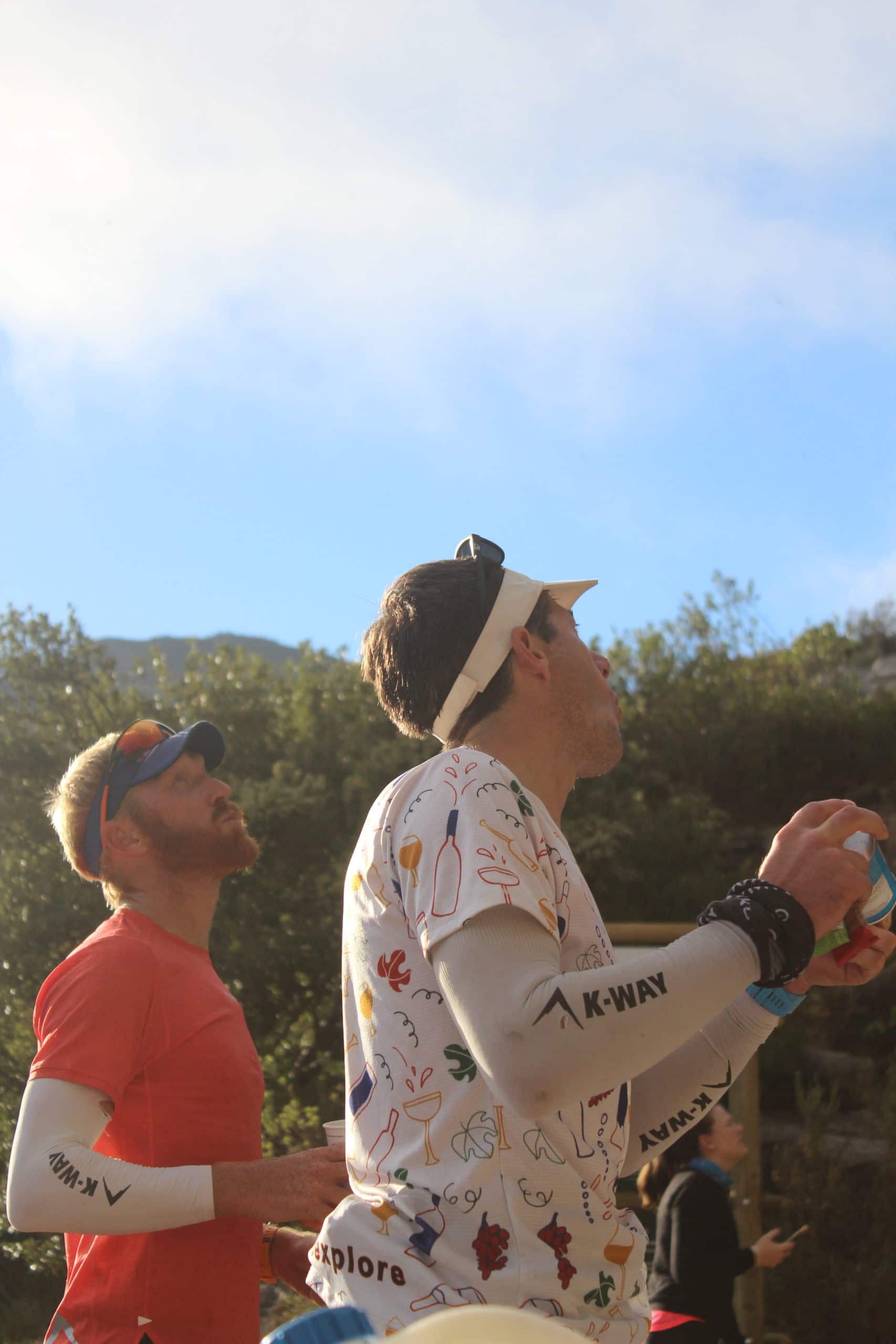 ← Man vs mountain: Christiaan's 100km UTD On mental toughness →
We use cookies to ensure that we give you the best experience on our website. If you continue to use this site we will assume that you are happy with it.Ok